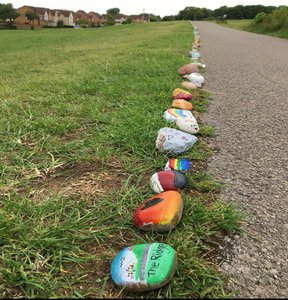 Many of you would have seen or maybe even been involved in the construction of the St Andrews Ridge covid rock snake during lockdown and are now left wondering what has happened to all those lovely painted stones.

Well, after some anti-social behaviour, where some of the stones were being thrown around, some local residents and Cllr Vince Williams collected them all up and locked them away for safekeeping. This was quite a large task as there are approximately 1700 of them.

After discussions with residents, the parish council has agreed that it would be great to have them on display somewhere in the parish. As most of the stones were painted by the children of St Andrews parish it was agreed that they should be put on display in the local vicinity and where they can be best seen by residents and children alike. So, in agreement with the rock snake originator, it was decided that a fitting tribute would be to locate them in one of the parish play areas, and after some research, it was agreed that Standen Way play park would be their final destination.

St Andrews Parish Council have now approached Swindon Borough Council (the landowner) with a view to laying a 30cm concrete strip all the way around the outside of the play area so all the covid rock snake stones can be re-laid out as a snake once more and set permanently in place around the border of the play park. Discussions with Swindon Borough council are now in their final stages.