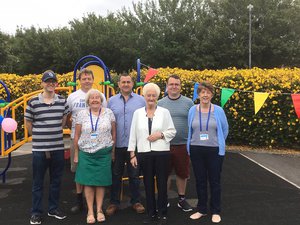 St Andrews Parish Council put on the special event after spending £38,000 to revamp the run down play park. Two new multi-play systems have been installed along with various bounce and twist play units and a ‘Streetboard’. The MUGA (multi user games area) and swings has also been updated which are very popular with the local children.

Children were treated to a gift bag (courtesy of Wicksteed the play equipment installer) and an ice-cream.

The parish council Chairman Vera Tomlinson said “I hope everyone likes the new park as it was the residents who chose the design following a series of public consultation at the Jovial Monk earlier in the year”.

The event was well attended and the local children gave an unanimous thumbs up to the new play park, promising to continue to use it.